Cross-Border Wanderings of a Young Whale

Tuesday, July 21, 2020 was a normal workday for me until mid-morning, when the phone rang; it was a friend who captains the Quoddy Link Marine whale and wildlife watch boat out of St. Andrews, New Brunswick (NB).

“Is there a whale in distress?” I asked quickly (that is usually why he calls!). “No,” he said, “We have a right whale just off East Quoddy Head!” East Quoddy Head is at the northern tip of Campobello Island, NB—where I live. Woohoo! This was the first right whale sighting of the season to be reported in the Bay of Fundy, and it put an end to my routine office work for a few exciting hours.

I called my co-worker Mackie Greene, who leads our Campobello Whale Rescue Team and owns a whale watch boat. In record time, Mackie, me, and a few family members and friends were aboard his boat and away. We soon spotted the whale in Chocolate Cove on the eastern shore of Deer Island, NB. There, a lone right whale, perhaps 35 feet in length (about the same length as Mackie’s boat) was surfacing about every five minutes and just ambling along the shore on the flood tide. My digital camera allowed for some close-up identification photos, which I immediately emailed to the Right Whale Research Program at the New England Aquarium. The team worked their usual magic and matched the whale to the 2019 calf of Catalog #2791; she looked small because she’s only 1.5 years old! Her last recorded sighting was February 18, 2020 off Daytona Beach, Florida. We followed her southerly travels through the “Old Sow” whirlpool and into US coastal waters, off Eastport, Maine, where she swam alongside a docked cruise ship and entertained the quarantined crew members, before heading as far south as Estes Head. Eastport residents turned out along the shore as word spread about this visitor. Right whales sightings are still rare in Head Harbour Passage, but there has been a small increase in the number of sightings over the past seven years.

We were soon wondering how far south this whale was going to swim as the waters get very narrow and the current increases off Lubec, ME (location of the field station for the NEAq Right Whale Research Program). Could the whale sense the change in water conditions? At about the same time that the tide changed, the whale swam a mile or so easterly from Estes Head, across Head Harbour Passage, back into Canadian waters. She had a look at some salmon pens in Friars Bay, then headed back north along the Campobello Island shore with the ebbing tide. The whale flukes off of Eastport, ME. Photo: Moira Brown, Canadian Whale Institute The whale made a full tour of Head Harbour Passage! Courtesy of Moira Brown.

On our return to Campobello Island, I called the local harbor pilot, Bob Peacock to see if any incoming ships were scheduled. There hadn’t been many this year, but sure enough, he was scheduled to bring one in that evening. As a precaution, Mackie took his boat back out to keep an eye on the whale and relay her positions to Captain Peacock- the incoming ship and the whale would be in closest proximity in the narrowest part of Head Harbour Passage. Captain Peacock instructed the ship to cut its engines to ease past the whale at 2.6 knots, and with the ship and the whale headed in opposite directions, they passed by with no incident. The young whale was last seen heading back out into the Bay of Fundy.

This encounter reflects a great collaborative effort that’s developed over many years by friends and colleagues on both sides of these border towns. 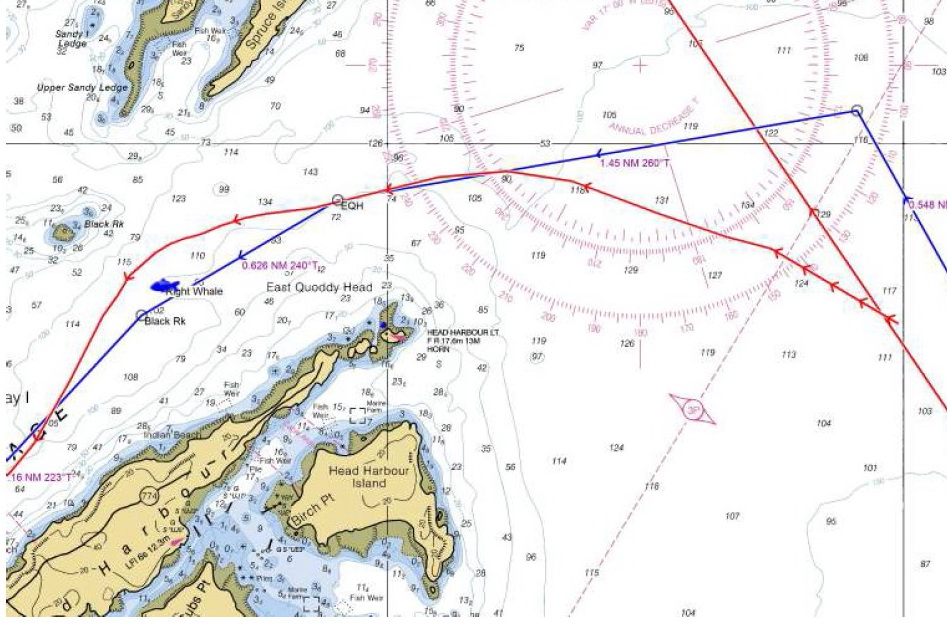